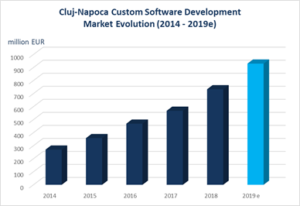 In other words, the backbone of Cluj-Napoca custom software development market is the biggest employer on the market, and has gone through many stages of the global software market and through several economic crisis.

Based on the positive economical trends in Romania and implicitly Cluj-Napoca, the local IT ecosystem favored entrepreneurship and investment in custom software development. The emergence of 798 software development companies during 2014 and 2019 (among which we can count also a few big development center relocations from Western Europe), has contributed to the constant growth of the total market turnover. As you can see in the chart, this segment grew from 269,89 million Euros in 2014 to an estimated 930,99 million Euros in December 2019.

The market y-o-y growth rates vary across the period, with a boost of 34% in 2015, and again an estimated growth of 30% in 2019 compared to 2018 due to the active promotion of Cluj-Napoca as a tech talent pool and cool professional life style destination.

The profit margins recorded on Cluj-Napoca custom software development marked improved over the studied period (2014 – 2019e), varying between 10% and 11% The peak of 11.78% profit margin was reached in 2016. 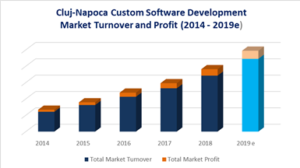 Analyzing the local custom software development market’s turnover and the weight of profit margin, we can observe that in spite of turnover growth, the profits remained around the same percentage.

This translates into two market facts:

Based on the annual average employee declarations at the National Agency of Fiscal Administration, the total employee number almost doubled from 2014 to 2018. This is also a consequence of the many new custom software development companies founded  or established in Cluj in the studied period. From a declared annual average number of 8325 programmers in 2014, Cluj custom software development market counted 15698 annual average employee number in 2018 to which we should also add freelancers and entrepreneurs. 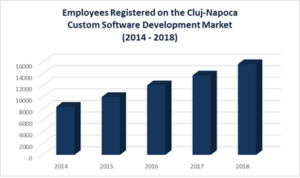 Why? The phenomenon is mainly due to the fact that tech companies from Cluj are recruiting from the same university IT graduate base. And the speed of developing a new generation of software developers is not the same as the speed of setting up new software companies and centers in Cluj-Napoca.

In order to find out the answer, we will be monitoring the new data sets available on the market and come back with more information.

This study is based on the NAFA public data sets and includes a pool of 1364 active companies.

You can find out more about which cookies we are using or switch them off in settings.